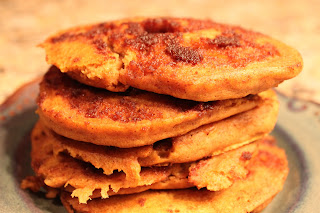 Directions:
1.
Prepare the Cinnamon
Filling:
In small bowl – mix butter, oil, brown sugar, and cinnamon.  Whisk the ingredients together and then pour
it into a sandwich-sized zip baggie. Let this sit while you make the batter for
the pancakes.
2.
Prepare the Pancake
Batter:
In large bowl – whisk together milk, pumpkin, eggs, oil, and vinegar.  In a separate bowl, whisk together flour,
baking powder, baking soda, pumpkin pie spice, and salt.  Add the dry ingredients to the pumpkin
mixture and stir just until all is moistened. Batter will be thick.
3.
Check on your cinnamon
filling:
Give it a good stir if needed.  Filling
should be somewhat thickened.  You can
put in the frig for few minutes if needed.
Snip off a small piece of the corner of the baggie.
4.
Cook the pancakes: Preheat a large skillet
or griddle to medium, and spray it with nonstick cooking spray.  Use an ice-cream scoop or ladle to add the
batter to the pan.  Spread the batter
into a nice, even circle.  Squeeze you
cinnamon filling baggie onto the pancake. Start in the center of the pancake
and squeeze the filling on top of the batter in a swirl-like pattern.  Cook the pancakes 3 or 4 minutes or until you
see bubbles popping up.  Gently flip the
pancake with a think spatula and cook an additional 2 or 3 minutes.  When you flip the pancake over onto a plate,
you will see a nice cinnamon swirl similar to a cinnamon roll.

·       If you do not have pumpkin
pie spice, use this combo instead: 1 tsp allspice, 1 tsp cinnamon, 1 tsp
ginger, ½ tsp cloves, ½ tsp nutmeg.
·       If you do not have whole
wheat flour, you can use all-purpose white flour.
However, whole wheat flour provides MORE fiber,
protein, and nutrients.
·       Milk – You can use
whatever you have on hand.  I used 1% for
this recipe.
·       This recipe can easily be
cut in ½, but keep the cinnamon swirl amounts the same.  FREEZE what you don’t eat!
·       What about the syrup? With
the addition of the Cinnamon Swirl, there is really no need for additional
sweetness.
If you disagree, try honey drizzled top,
slightly-sweetened cream cheese icing, or real maple syrup)

Kids Kitchen Konnection: My kids are in love with this pancake.  Comments have been, “It’s Sooo Good!, It’s the best I have ever had!”  Cooking Class Kids had similar reactions too.  They get to see and help mix up all the ingredients.  Seeing and learning about whole wheat flour, pumpkin, canola oil, and cinnamon!