Kids ‘in the’ Kitchen Thursday – We got a little fruity! 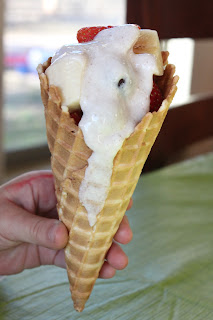 Is that ice cream you say?  I say…not.

It is an ice cream cone, but filled with cut-up fruit and a yogurt sauce dripped on top that deserves a healthy dessert recognition for sure!

Try serving this up at your next birthday party.

Or, instead of make your own Sundae night, have the kids make this!

We learned about each fruit as the kids did their own cutting and dicing.  They used plastic lettuce knives and kitchen scissors to cut red pear, banana, and strawberries.  We also through some purple grapes in there too!

And, the yogurt sauce on top?  YUMMO!  Flavored with vanilla, cinnamon, and a little bit of sugar – it completed this snack/dessert.

Now, it looks just a like a melting ice cream cone.

The Fruity Waffle Ice Cream Cone
Fresh fruit, cut up.
(We used grapes, strawberries, and bananas.)
Plain, low fat yogurt
Cinnamon
Vanilla Extract
Sugar
Ice Cream Waffle Cones
Directions:
Wash and cut up fruit.
Make yogurt sauce in a bowl: (enough for one cone serving)
1/2 cup yogurt, dash of cinnamon, tiny dash of vanilla, and a sprinkle of sugar (to taste)
Fill fruit to the top of your waffle cone. Drip yogurt on top, or layer fruit and yogurt in the cone.
Now, eat like a melting ice cream cone!

Kids Kitchen Konnection:
Kids were very entertained as they cut and sliced all their fruit for the cones.  Mixing up their own yogurt sauce was also fun!  Most kids enjoyed this treat, and nobody complained we did not have ice cream to put in the cone.  EVERYONE agreed it would be fun to serve at their next birthday party!